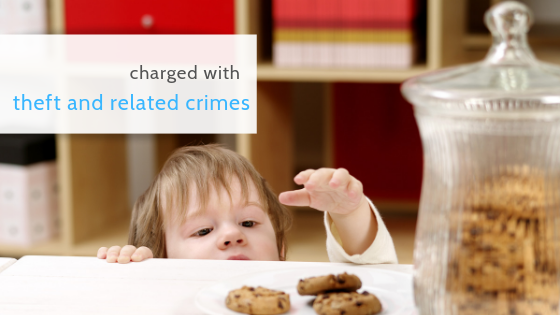 People have been accused of taking things that don’t belong to them since the dawn of mankind; these days, we call these allegations theft charges. According to the Florida Department of Law Enforcement, 395,149 people were arrested for theft charges in Florida in 2017. Of those theft charges, 5,571 arrests were made in Gainesville and the Alachua County area.

Theft charges are basically as old as time. The term “larceny” is often used: it just means the same thing. The law governing these sorts of crimes in Florida used to be referred to as the “larceny” statute, now it is referred to as “theft.”

What are the Laws Against Theft in Florida?

This basically means that if a person has taken another person’s property, there is potentially a theft charge. The statute requires the taking to be done with what I’ll summarize as “selfish” intent. To the extent that the statute discusses not just obtaining the property of another but even “endeavoring” to obtain the property, the statute treats actual thefts and attempted theft with equal severity. And, it penalizes “temporarily” taking someone’s property as much as “permanently” doing so. So, no joyriding!

The theft statute really classifies different levels of theft by degrees, and penalizes each one differently.

Grand theft in the first degree, a first-degree felony, is typically reserved for when the amount allegedly stolen was valued at $100,000 or more.

Grand theft in the second degree, a second-degree felony, is typically reserved for when the amount allegedly stolen was valued at less than $100,000, but at least $20,000 or more.

Grand theft in the third degree, a third-degree felony, is typically reserved for when the amount allegedly stolen was valued at less than $20,000, but at least $300 or more. There are a number of sub-brackets within this particular statute, but they relate to sentencing, not to the overall degree of felony that a person would be facing. There are also a number of specific items in this category that make the theft charge a third-degree felony without regard to value. Theft of a firearm is one example. Theft of a motor vehicle is another. For these items, there’s not going to be a discussion or a debate about how much the alleged victim’s car was worth. The stolen car or stolen gun will garner a third-degree felony theft charge by themselves. There are also a variety of other items and other charges in the statute, but we’re going to stick with the most common theft charges.

A theft charge involving property valued at less than $300 is petty theft (sometimes referred to as “petit theft” or “petty/petit larceny”). This is typically a misdemeanor.

Shoplifting can be petty theft if the dollar-amount is low enough. But Florida Statutes section 812.015, the “retail theft” statute, can warrant enhanced penalties for any second (or subsequent) shoplifting offense, and the retail theft statute also makes it an independent crime to resist a merchant’s employee or agent in a shoplifting situation. So think twice before knocking down that security guard!

“Aggregation” and Penalties & Punishments for Theft

The theft statute has a provision that allows “aggregation.” This means that if the police and the prosecutors can successfully claim that a series of thefts were connected in some way, they can aggregate (add up) the various individual amounts and total them all up into one big amount, as a way to get what might otherwise be a handful of smaller events wrapped up into a charge that enhances the overall charge to a more severe degree of felony. In other words, if the police and the prosecutors need to be able to allege $20,000-worth of theft to make the case a second-degree felony, and if there are three $7,000 thefts that are arguably related in some way, then the accused can face a second-degree felony (punishable by up to 15 years in prison) rather than only facing a handful of third-degree felonies.

Defenses to a Theft Charge

Typical defenses to a theft charge can include a claim that the property was actually abandoned, or typical alibi defenses, double-jeopardy arguments, and arguments about whether the person had an intent to defraud or not, for lack of a better term.

Stealing is one thing, but the police and prosecutors are also always on the lookout for people dealing in stolen property. This is sometimes referred to as “fencing.” Florida Statutes section 812.019 makes it illegal for a person to traffic (or endeavor to traffic) in property that he or she knows or should know was stolen. What does it mean that a person “should know?” Depending on the circumstances, in a case like this, the prosecution can ask for a jury instruction directing the jurors to infer that if someone is in possession of recently-stolen items, that there should be a presumption that they knew the items were stolen. Dealing in stolen property is typically a second-degree felony, but if a person “initiates, organizes, plans, finances, directs, manages, or supervises the theft of property,” then it can be a first-degree felony (punishable by up to 30 years in prison).

In any event, The Weisman Law Firm handles theft charges for people accused of crimes.  The founders had the sense to establish the constitutional principles that we’re all presumed innocent until proven guilty, the burden is on the state to prove a person’s guilt beyond a reasonable doubt, and that any person accused of a crime is guaranteed effective representation.  If you, a friend, or a loved one has been accused of a crime like this, feel free to contact The Weisman Law Firm for a free, confidential consultation.