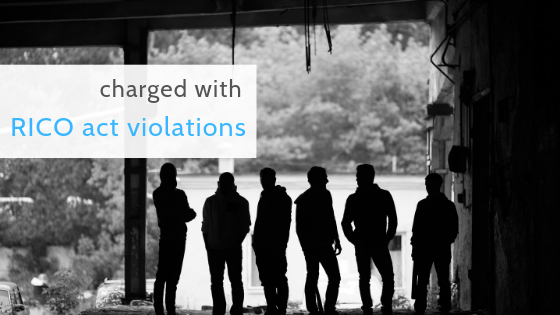 The Racketeering Influenced and Corrupt Organizations Act (“RICO”) is a set of laws in federal and Florida statutes aimed at punishing all the participants in any group of people committing crimes for an ongoing purpose.  It is rumored (but unconfirmed) that the acronym RICO is a nod to a character in an old gangster movie.

It is unlawful for any person employed by, or associated with, any enterprise to conduct or participate, directly or indirectly, in such enterprise through a pattern of racketeering activity or the collection of an unlawful debt.

There is more to the RICO statutes than this, of course, but this provision (which outlaws what people in the trade call “pattern RICO”) is the most widely used criminal law in the RICO space.  RICO, and RICO Conspiracy, are both first-degree felonies in most cases, unless an enhancement exists (for example, the “kingpin” enhancement).

In a RICO case, the government basically has to prove that (a) an enterprise exists; (b) a person is associated with that enterprise; and (c) the person has participated in or conducted the enterprise through a “pattern of racketeering activity.”

But what does this all mean?

The Existence of a RICO “Enterprise”

“Enterprise” means any individual, sole proprietorship, partnership, corporation, business trust, union chartered under the laws of this state, or other legal entity, or any unchartered union, association, or group of individuals associated in fact although not a legal entity; and it includes illicit as well as licit enterprises and governmental, as well as other, entities. A criminal gang, as defined in s. 874.03, constitutes an enterprise.

So, to the extent that an “enterprise” can be a “group of individuals associated in fact,” what does that really mean?  We all understand that a crime family can be an enterprise – but what about you and your buddies?  Do you become a RICO enterprise just because one guy might drink a little too much, another guy might like to smoke something, and your other friend gets into barfights from time to time?  The prevailing definition at the moment is that, to prove an enterprise, the government has to prove (1) an ongoing organization, formal or informal, with a common purpose of engaging in a course of conduct, which (2) functions as a continuing unit.  In the case that established that rule, undercover drug police were going “off books” and robbing suspected drug dealers (think “Training Day”), and even though there were only a handful of defendants, and even though they operated for a short time and on an informal basis, the Court found that there was an enterprise.  On the other hand, if the group is in existence for a short time and has no real unity of purpose, there will be a good defense to a racketeering charge.

“Association” with the Enterprise

If there is an “enterprise,” the question of whether someone “associates” with it is usually something that is either evident or not from the proof in the case.  Either you associate with a group or you don’t, and if the government has the evidence that you do, they should be able to present evidence of this.

Participation in the Enterprise through a “Pattern of Racketeering Activity”

This element is probably the crux of most RICO cases.  Not only does there have to be an enterprise, and not only do you have to associate with it, but the government must prove that you participated in the enterprise “through a pattern of racketeering activity.”  What the heck does that mean?  In short, it means that the government must prove that you committed at least two qualifying crimes (these are called “predicates”), and that those crimes were related in nature and formed the basis for your participation in the organization.

What are the Qualifying Crimes for RICO (a.k.a. “RICO predicates?”)

The RICO predicates are a laundry list of qualifying crimes found at Florida Statutes section 895.02(8).  Most violent crimes are included, many financial crimes are included, and although there are some exceptions, you don’t see too many “garden variety misdemeanors” on the list.  The list is comprised of crimes that the legislature thinks could be susceptible to “gangster activity.”

The Requirement for a “Pattern” of RICO Activity to be Proven

The key thing that the government has to prove in a RICO case is that a person committed at least two of these qualifying crimes, and that the predicate crimes committed had “the same or similar intents, results, accomplices, victims, or methods of commission or that otherwise are interrelated by distinguishing characteristics and are not isolated incidents.”

“Relatedness and Continuity” in RICO Cases

When do two crimes constitute a “pattern?”  One thing to look at is whether the crimes are fairly related to the affairs of the enterprise.  If the government is saying that a handful of guys are bilking a pension fund, but one of them also likes to do drugs on the side, and he ends up selling in order to support his habit, are his drug crimes RICO predicates?  Probably not.  On the other hand, in one case that Mr. Weisman prosecuted, it was a RICO case against a homegrown-type gang in the Tampa/Plant City area, and one of the alleged affairs of the gang was to rob migrant workers.  Any event that the prosecution team could put on evidence of that involved that sort of conduct was considered a tight-fit between the predicate crimes and the affairs of the enterprise, so all that evidence came in.

Another thing that has to be looked at to see whether the government has a RICO case is the timing of things.  Seasoned attorneys in this space talk of this in terms of “relatedness and continuity.”  Relatedness, in my opinion, is the fit between the predicate crimes and the affairs of the enterprise, as well as the relatedness between one predicate crime and another.  Continuity refers to how close together (or far apart) in time the predicate crimes occurred.  The government is looking for a “goldilocks” solution to this problem:  if they are prosecuting someone for RICO, and the person only has two alleged predicate crimes, and the crimes are separated in time by multiple years, it’s going to be a problem for the government.  Similarly, if the only two predicates are merely days apart, the pattern is not adequately ongoing to present the sort of threat the RICO act envisions.  Put another way, we shouldn’t prosecute someone with RICO for having a bad week.

In any event, The Weisman Law Firm handles RICO charges for people accused of crimes.  Dan Weisman used to focus on building and prosecuting RICO cases for the Attorney General of Florida.  You can read about his substantial experience in this space by visiting the bio page.

The founders had the sense to establish the constitutional principles that we’re all presumed innocent until proven guilty, the burden is on the state to prove a person’s guilt beyond a reasonable doubt, and that any person accused of a crime is guaranteed effective representation.  If you, a friend, or a loved one has been accused of a crime like this, feel free to contact The Weisman Law Firm for a free, confidential consultation.