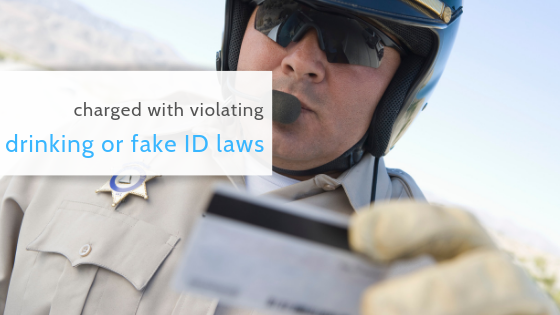 Understanding the rules surrounding drinking laws and fake ID’s in Florida can save you from an embarrassing and potentially costly arrest.  And understanding what laws people often get arrested for while drunk can go a long way, too.

What are the Drinking Laws in Florida?

The law in Florida is that you have to be 21 years of age in order to possess alcohol in most circumstances.  As part of the trend of morality-based legislation that was sweeping the nation at the time, the federal government passed the National Minimum Drinking Age Act of 1984.  Highway funding was to be withheld from any states that did not raise the drinking age to 21, and Florida took the money.

No Possession of Alcoholic Beverages Under 21 Years  – Drivers’ License Suspension

Florida Statutes section 562.111(1) makes it a misdemeanor for any person under the age of 21 to possess any alcoholic beverage.  There are some exceptions, such as for servers at restaurants and for people and students in the hospitality industry (or endeavoring towards a degree in that field), but the bottom line is that the normal public is prohibited from possessing alcoholic beverages, in any way, shape, or form, until the age of 21.  A conviction for this statute will also be reported to the Florida Division of Highway Safety & Motor Vehicles, which will suspend the person’s driving privileges as further punishment for drinking underage.

Florida Statutes section 562.11(2) also makes it a misdemeanor for a person to “misrepresent or misstate his or her age” for the purpose of getting someone to sell you an alcoholic beverage.  So, in addition to whatever other fake-ID laws that may be on the books, just misrepresenting your age to the doorman or bartender could be another crime.

Fake ID’s are Now a Felony in Florida

Florida Statutes section 322.212 now makes it a third-degree felony for any person to possess any kind of fake drivers’ license or state-issued identification card.  This applies whether it was created from whole cloth, whether you get someone else’s ID who looks passably like you, or whether you alter a portion of an otherwise-legitimate card.  If the only thing you do is to change the birth-date, it can be a misdemeanor.  But other than that, it’s now a felony.

Above and beyond the mere possession of a fake drivers’ license being a third-degree felony, Florida Statutes section 831.29 states that anyone who has any instrument or material “for the making of a false and counterfeit driver license or identification card purporting to be issued by the Department of Highway Safety and Motor Vehicles” is guilty of a second-degree felony (punishable by up to 15 years in prison).

And, should you run into trouble and if the police get involved, don’t present your fake ID to the police!  That is another misdemeanor crime in and of itself, according to Florida Statutes section 901.36, which outlaws giving a false name or false identification to law enforcement.

Disorderly Intoxication (a.k.a. “Drunk and Disorderly”)

Florida Statutes section 856.011 states that no person  “shall be intoxicated and endanger the safety of another person or property, and no person in the state shall be intoxicated or drink any alcoholic beverage in a public place or in or upon any public conveyance and cause a public disturbance.”  So, basically, if you’re drunk in public, you’d be well advised to be low-key about it.

So, for all you “cool” moms and dads out there, be aware of this one!  It’s a misdemeanor as well.

In any event, The Weisman Law Firm handles cases involving charges for people accused of crimes like drinking laws and fake ID’s.  The founders had the sense to establish the constitutional principles that we’re all presumed innocent until proven guilty, the burden is on the state to prove a person’s guilt beyond a reasonable doubt, and that any person accused of a crime is guaranteed effective representation.  If you, a friend, or a loved one has been accused of a crime like this, feel free to contact The Weisman Law Firm for a free, confidential consultation.