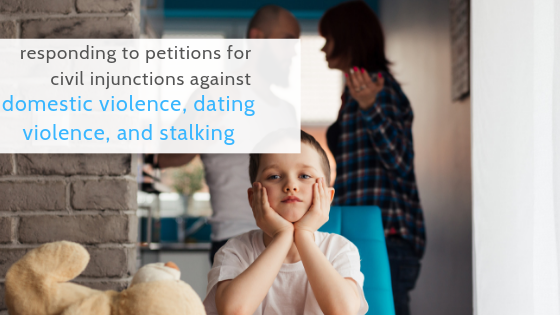 In Florida, people can do more than going to the police with their problems: people can apply to the court for civil injunctions directed at domestic violence, dating violence, stalking, and the like.  These actions are civil actions, but they can have some serious collateral consequences.

What is the Standard of Proof for an Injunction?

In the context of a domestic violence injunction (governed by Florida Statutes section 741.30), the burden is for the petitioner (the person who wants the injunction put in place) to prove that they have “reasonable cause to believe he or she is in imminent danger of becoming the victim of any act of domestic violence.”  Once the petition is filed, the court typically has 15 days to bring the matter to an evidentiary hearing, which is basically like a mini-trial.  At the evidentiary hearing, the parties have the ability to take testimony and offer evidence.  And then the court makes the decision.

What Happens When You Go to Court on an Injunction?

The court can impose an injunction, typically calling for the respondent (like the defendant in a criminal case) to have to stay at least 500 feet away from the petitioner at any point in time.  An injunction can often either be a year in length or it can be indefinite.  There are other forms of relief, including that the court can determine the common residence entirely the petitioner’s to occupy.  Either party can file a request with the court at a later date to have the injunction modified or lifted.  But while the injunction is in place, it imposes serious consequences on the respondent.

Consequences of Having an Injunction Placed on You

The consequences of an injunction can be life-altering, and can include:

In addition to the collateral consequences that you face if an injunction is entered against you for domestic violence, dating violence, or stalking, it gets worse: often, an accusation that a person subject to an injunction broke the injunction is punishable as a whole new crime.  So, even though an injunction was originally placed on a person through a civil case, any alleged violation of that injunction can subject you to criminal penalties.

The Weisman Law Firm handles matters involving civil injunctions for domestic violence, dating violence, stalking, and the like.  Contact us today for a free, confidential consultation.