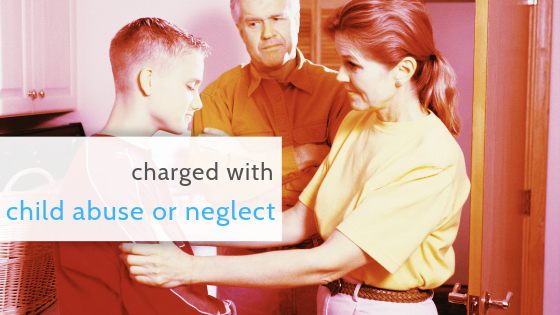 It’s hard enough being a parent these days, let alone having to be concerned about child abuse and neglect charges.  Many things that would have been considered “normal parenting” back in the day would now get you arrested!  But, with that being said, society has an interest in making sure parents don’t “go overboard” in disciplining their children, so there are a number of laws in place to protect children in this context.

What are Child Abuse & Neglect Charges?

Florida Statutes section 827.03 governs child abuse and neglect.  Subparagraph (1)(b) defines child abuse as when someone engages in:

Child abuse is typically a third-degree felony, unless the child sustains serious injuries, in which case it is enhanced to a second-degree felony.

Furthermore, Florida Statutes section 827.03(1)(a) defines aggravated child abuse as when someone:

1. Commits aggravated battery on a child;
2. Willfully tortures, maliciously punishes, or willfully and unlawfully cages a child; or
3. Knowingly or willfully abuses a child and in so doing causes great bodily harm, permanent disability, or permanent disfigurement to the child.

1. A caregiver’s failure or omission to provide a child with the care, supervision, and services necessary to maintain the child’s physical and mental health, including, but not limited to, food, nutrition, clothing, shelter, supervision, medicine, and medical services that a prudent person would consider essential for the well-being of the child; or
2. A caregiver’s failure to make a reasonable effort to protect a child from abuse, neglect, or exploitation by another person.

Other common statutes and laws used to prosecute these types of offenses include the culpable negligence statute (F.S. 784.05), and Florida Statutes section 827.04, typically referred to as “contributing to the delinquency of a child.”  This means that it is a crime for any person to do or say anything that encourages any child to become delinquent.  It’s an incredibly broad statute, but is typically a misdemeanor.

One of the most common defenses in these cases is the defense that, in Florida, a parent is allowed to engage in reasonable corporal punishment, which typically allows disciplinary striking and ordinary spankings.  Where is the line between “reasonable discipline” and “child abuse?”  You’re not going to find it clearly drawn in the sand anymore.  A good “rule of thumb” in this context is that, if Florida Department of Children and Families (DCF) or the police begin investigating your parenting, a spanking is one thing, and a little bruising is another, but once we start getting down the spectrum to hospitalizations and the use of foreign objects, you’d better consult counsel.

What Should I Do if I am Suspected or Arrested for Child Abuse or Neglect?

You should consult counsel.  At least one article has documented how maliciously false reports of child abuse can be used to harass people. And, although the data is sometimes hard to come by, reports by DCF from 2006 and 2011 document that it is not out of the ordinary for there to be hundreds of false child abuse reports per year.

These charges run the gamut from misdemeanors to incredibly serious felonies, and having counsel at your side before, during, and after any investigation or prosecution will go a long way to either defending your rights or even hopefully and possibly defusing the situation before a criminal proceeding becomes imminent.

The Weisman Law Firm defends child abuse and neglect charges for people.  The founders had the sense to establish the constitutional principles that we’re all presumed innocent until proven guilty, the burden is on the state to prove a person’s guilt beyond a reasonable doubt, and that any person accused of a crime is guaranteed effective representation.  If you, a friend, or a loved one has been accused of a crime like this, feel free to contact The Weisman Law Firm for a free, confidential consultation.