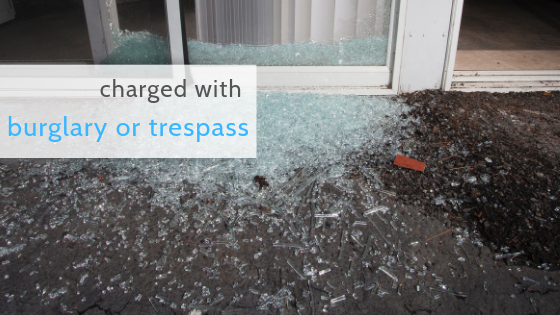 Burglary or trespass charges are different crimes, but they are related closely-enough to be addressed in the same discussion.

Burglary basically means entering someone else’s property with the intent to engage in another act that would constitute a crime while in there.  In Florida in 2017, there were 88,778 burglaries reported, according to the Florida Department of Law Enforcement.  1120 of those burglaries were reported in Gainesville and the Alachua County area, as discussed in one of my previous articles about crime statistics.

According to Florida Statutes section 810.02:

A basic burglary is typically a third-degree felony in Florida, but if the accused is (or becomes) armed in the process, or if an assault or battery occurs during the course of the burglary, it can become a first-degree felony punishable by life in prison.

Defenses to a Burglary Charge

Trespassing is essentially entering or remaining on or in someone else’s property or vehicle without permission. Florida Statutes section 810.08 states:

Chapter 810 also extends trespassing to school grounds and posted lands.  Trespassing is typically a misdemeanor unless an enhancement exists, such as “armed trespassing,” which is a third-degree felony.

In any event, The Weisman Law Firm handles burglary and trespass charges for people accused of crimes.  The founders had the sense to establish the constitutional principles that we’re all presumed innocent until proven guilty, the burden is on the state to prove a person’s guilt beyond a reasonable doubt, and that any person accused of a crime is guaranteed effective representation.  If you, a friend, or a loved one has been accused of a crime like this, feel free to contact The Weisman Law Firm for a free, confidential consultation.