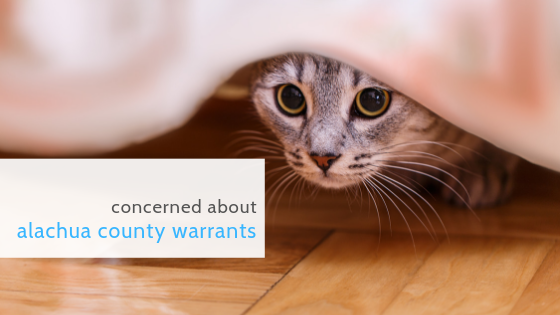 If you are concerned about Alachua County warrants, you probably have a good reason.  In terms of general process in the criminal justice system, the way things typically work is that unless a law enforcement officer sees a crime committed with her own two eyes, in most cases, a policeman or a victim swears out an affidavit alleging that some events occurred that would constitute a crime, and an arrest warrant is applied for and is usually signed and entered by a judge. This is the normal way for arrest warrants to be issued.

Another way that arrest warrants get issued is via “capias.”  This is a fancy way of referring to a bench warrant or a warrant that doesn’t come through normal law-enforcement-guided channels.  One way that a capias can be issued is if the prosecutors “direct-file” a case.  This is when the prosecutors file formal charges before the police have even arrested someone.  They do this from time to time, for various procedural and strategic reasons.  But it’s not an every-day thing.  When this happens, the clerk actually has the authority to issue the warrant.

Another more common form of capias or bench warrant is when someone doesn’t show up for court.  The judge will say “issue a capias for FTA with no bond,” or typically words to that effect.  What that means is that the person had a court date, didn’t show, and the judge is authorized to direct the clerk to issue a warrant right then and there for failure to appear (“FTA”).

In addition to the judge issuing a bench warrant for failure to appear, failure to appear can also be charged as an independent crime.  Florida Statutes section 843.15 states that anyone out on bond who willfully fails to appear to any required court date either commits a misdemeanor (if the underlying charge that they were out on bond for in the first place is a misdemeanor) or a third-degree felony (if the charge they bonded out on was a felony).  The degree of “willfulness” is an element to this charge that a seasoned attorney can potentially base a defense on.

One way people get ahead of this is by contacting an attorney to either arrange for a “turn-in,” or some other sort of voluntary surrender, or sometimes the case may able to be worked out pre-arrest.  No lawyer is going to aid a person in fleeing the authorities.  But a seasoned attorney can certainly advise someone as to the risks inherent in their situation and as to how to address next steps in order to be able to lawfully navigate the often perilous road of the criminal justice system.

Many jurisdictions have “warrants pages” where it is accessible online to see who has outstanding warrants.  There are two schools of thought on this, from a law enforcement perspective.  One school of thought is that wanted persons should never be tipped off to the fact that they’re being sought by law enforcement, because it levels the playing field, informationally speaking, by putting the person on notice that they’re wanted, and in so doing it enables them to evade law enforcement more effectively.  The other school of thought (and the one that is prevailing in most jurisdictions) is that most people with warrants are not hard-core career criminals, and most people with warrants would actually want to know, so that they can set their affairs in order and confront whatever obstacles facing them, rather than run the risk of being randomly arrested in front of friends or family the next time you just happen to get pulled over for speeding or what have you.  The Alachua County Sheriff’s Office, for example, has a warrants page for the viewing public to explore.

If you or a friend or a loved one has Alachua County warrants, feel free to call The Weisman Law Firm for a free, confidential consultation about your options.