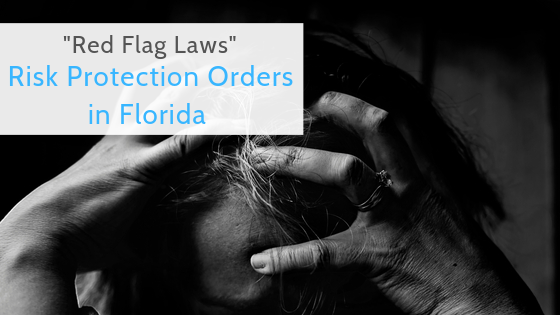 Law enforcement has a new tool in Florida Statutes section 790.401, which became effective law in 2018. The law is entitled “Risk Protection Orders.” It allows law enforcement to request a judge to issue an order directing a person (called a “respondent” in these proceedings) to turn over all their guns, ammunition, and carry permit to law enforcement upon demand. For a risk protection order (“RPO”) to be issued by a judge, law enforcement must prove that the person’s possession of guns or ammunition poses a “significant danger of causing personal injury” to themselves or others. Law enforcement must prove their case by “clear and convincing evidence” (which is typically viewed as being a lower standard than “beyond a reasonable doubt” but higher than a “more-likely-than-not” standard. If a judge enters an RPO, it can be for any period of time up to a year. If law enforcement wants to extend it beyond that point, an extension must be obtained through the judge.

Am I Entitled to an Attorney in an RPO Proceeding?

There is no right to an attorney in an RPO proceeding, but the respondent has the right to be represented if counsel can be secured.

Any evidence bearing on whether the respondent’s possession of guns presents a significant risk of danger to themselves or other would be relevant at the RPO hearing, but the following issues are identified in the statute as being explicitly relevant:

Can Law Enforcement Come Into My House and Take My Guns?

The RPO initially is simply an order directing the respondent to turn their guns, ammunition, and their concealed carry permit over to law enforcement. This places the obligation on the respondent to turn his or her property over to the police. It does not immediately authorize the police to search someone’s house for guns pursuant to an RPO. The respondent is required to be truthful in front of the court as to whether they have any guns and whether they’ve given everything up to the police. Lying in this regard can constitute felony charges.

What Happens After Law Enforcement Gets My Guns Pursuant to an RPO?

The petitioner obviously has the right to retain counsel to fight the initial issuance of the RPO (or to go pro-se, which means to represent yourself). The petitioner also has the right to have another hearing to try to prove that the RPO should be vacated. The fact that an RPO has been issued is immediately communicated to state and national crime information databases (FCIC and NCIC), and this information remains in those systems as long as the RPO is in effect. And, when the RPO eventually either is terminated or expires, the respondent can get their guns back from law enforcement (as long as there’s no other problem with the respondent’s gun rights). Another person (a family member, friend, loved one, etc.) can also make themselves available to take possession of the guns in question as long as certain requirements are met.