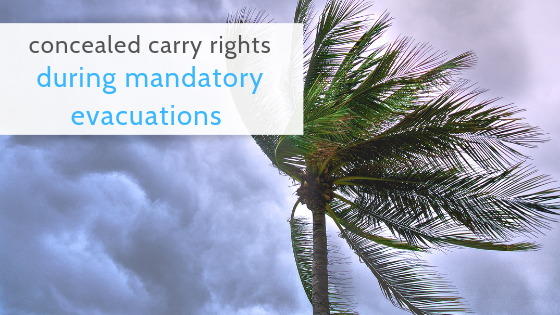 What are our concealed carry rights as Floridians when the government has declared a state of emergency and a mandatory evacuation order has been issued for the area you’re in?

For starters, the general rule in Florida is that you can’t carry a concealed firearm out in public without being a permit holder. As I discussed in another fairly detailed post, you can carry in your vehicle without a permit as long as you do it according to certain rules.

But, according to Florida Statutes chapter 790.01(3)(a), if a state of emergency has been declared by the government and if you’re in the act of evacuating during a state of emergency in response to a mandatory evacuation order, you can carry concealed out on the streets without a permit. Here is how the provision reads:

A person who carries a concealed weapon, or a person who may lawfully possess a firearm and who carries a concealed firearm, on or about his or her person while in the act of evacuating during a mandatory evacuation order issued during a state of emergency declared by the Governor pursuant to chapter 252 or declared by a local authority pursuant to chapter 870. As used in this subsection, the term “in the act of evacuating” means the immediate and urgent movement of a person away from the evacuation zone within 48 hours after a mandatory evacuation is ordered. The 48 hours may be extended by an order issued by the Governor.

So, here are the takeaways:

I also briefly touched on this topic in one of my videos, feel free to click here if you’d like to view it.

This law is directed at helping law-abiding citizens have gun rights to protect themselves and their families from hooligans and highwaymen during the heightened dangers and anxieties of hurricanes and other natural disasters. Forewarned is forearmed! Know the law and stay safe.