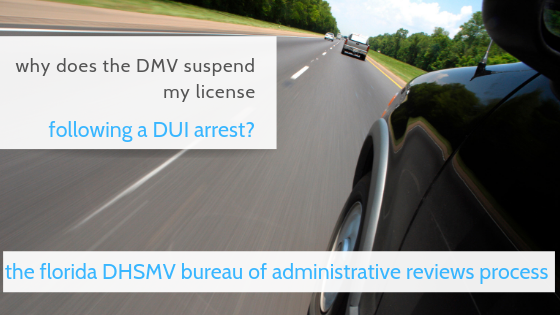 The Florida Department of Highway Safety and Motor Vehicles (DHSMV) will suspend your license after you’ve been arrested for driving under the influence (DUI) in Florida, and that’s just a fact.  The process for this is called a DHSMV bureau of administrative reviews formal review hearing.

Upon arrest for a DUI, the arresting officer will typically seize the accused’s driver’s license during the course of the arrest, and will give the accused the citation (ticket) that was issued in connection with the DUI, and that citation itself functions as a substitute license for 10 days.  This is because either the mere allegation that your breath-alcohol-content (BAC) is over the legal limit or the fact that you refused the breath test is cause for the DMV to institute a proceeding to put an “administrative suspension” on your license.  This is the beginning of the DHSMV bureau of administrative reviews formal review hearing process.

During the 10-day period, the accused is allowed to use the citation as a substitute driver license and they have that period of time to decide what they want to do about the fact that the DMV is going to suspend his or her driving privileges.

The typical options are (a) let the 10 days elapse and do nothing (and have your license automatically suspended); (b) request a hardship license from the DMV during the course of the DUI court case; or (c) invoke the right to a hearing with the DMV.

This last course of action can either result in the suspension being invalidated, or if the hearing is conducted and the driver loses, then the suspension takes effect and is typically of a longer and harsher duration than if the person asked for a hardship license at the outset.  On the other hand, conducting a hearing can have some advantages in terms of developing evidence to help you defend against a DUI prosecution.

Being arrested for a DUI is enough to deal with, let alone having to deal with the parallel proceedings of county court and the DMV.  But knowing what’s in store can go a long way towards giving you a sense of what’s coming and how to best deal with it.