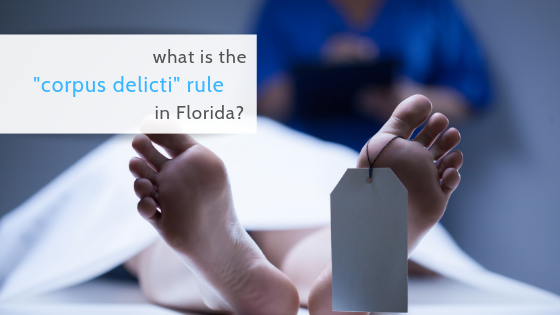 Everybody knows that the law is full of latin phrases for what should be terms expressed in kitchen-table language: but what is the “corpus delicti” rule in Florida?

The term itself, literally, means “the body of the crime.”  It is commonly accepted that the “corpus delicti” rule in Florida criminal cases means that, in order for a prosecution to have legs, there must be proof, independent of a confession, that a crime was committed.

The corpus delicti rule was initially adopted a long time ago in order to safeguard against people being imprisoned based on what could potentially be a false confession alone, in the absence of any other evidence whatsoever that a crime was even actually committed.  It has been referred to as a rule that requires the government to prove that there is at least some evidence on each material element of the crime at issue before the accused’s own statement can be offered into evidence against him or her.

“Ordinarily, proof of the corpus delicti of the crime charged is required before a confession or admission against interest may be received in evidence.”

So, in a typical case, the government typically will have to put on evidence that a harm has been suffered (e.g., in a homicide case, that a person is dead) and that the harm was done through the criminal agency of another, before it can introduce evidence that the accused made statements implicating himself in the crime.  If the government cannot establish the “corpus delicti” of the crime itself, the accused’s confession cannot be used as evidence.

The corpus delicti rule may very well be rooted in homicide cases, but it is often applied in other types of cases as well.  Driving under the influence (DUI) cases require the government to prove, first of all, that the accused was, indeed, driving.  Because of the normal way of things in many crash cases, the police often don’t arrive until after everyone is out of their vehicles, and sometimes there are no other witnesses who can offer testimony putting the accused “behind the wheel.”  So it often comes to pass that there are corpus delicti issues in DUI cases, and, in some cases, it is a colorable defense.

In addition to DUI cases, the corpus delicti rule sometimes comes into play in drug, theft, and gun cases as well.  The courts are not quick to dismiss cases for lack of corpus delicti, but it is known to happen.  A good rule of thumb is probably that the weaker the overall case is, the better your corpus delicti argument will probably be.

The primary function of this requirement is to protect the defendant “from being convicted of a nonexistent crime due to ‘derangement, mistake or official fabrication.’”

The corpus delicti rule presents an often overlooked defense to many criminal cases, it goes back quite some time, and is a basic rule of fundamental fairness. And, hopefully, this post has been helpful in setting forth the applications and contours of this rule.