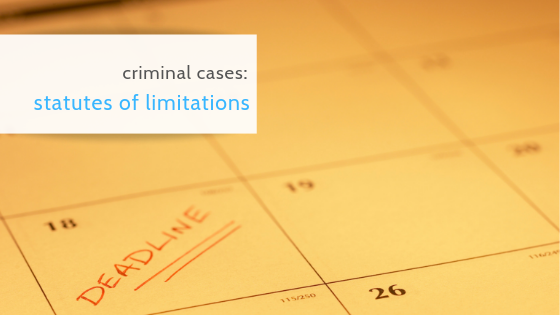 What are the criminal statutes of limitations in Florida?

It depends on the crime being alleged.  But perhaps the first question is why there are statutes of limitations in the first place.  The “statute of limitations” basically sets forth the amount of time that the government has to either initiate a proceeding against a person or it loses the right to do so.  There are a number of reasons states enact statutes of limitations in criminal and civil proceedings, mostly having to do with the notion that if there is evidence to initiate a proceeding, it should be done in a timely manner, and if there isn’t, the person shouldn’t have to spend his or her life looking over their shoulder.  A person should either be given their day in court or they should be given a measure of repose so that they can move on with life.

And there are a number of other specifically-set statutes of limitations in Florida Statutes section 775.15, which is where all this is found.

The statute of limitations on an event alleged to be a crime begins running when the alleged act is committed.  Subsection (3) says that

So, if the event is a single-transaction type of event, like a robbery, it is easy to fix the date upon which the clock starts ticking for the government. If it is a conspiracy or some other ongoing course of conduct, it’s a little more tricky.

How does the government “stop the clock” so as to prevent losing a case to the statute of limitations? Subsection (4) states as follows:

Prosecution on a charge on which the defendant has previously been arrested or served with a summons is commenced by the filing of an indictment, information, or other charging document.

So, the government typically has to stop the clock by filing a formal charging document, not by merely issuing an arrest warrant or even by making an arrest.

As they say, “sometimes timing is everything!”