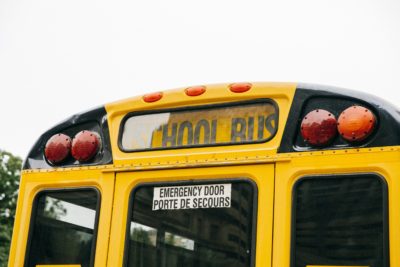 We all know that school buses stop a lot, and we’ve all been behind one in traffic from time to time.

But what about when a school bus is heading towards you, from the opposite direction, and it slows down and the lights start flashing and the “stop” signs rotate out?  Do you have to stop?

The answer depends on how substantial the median is in between you and the oncoming school bus.

Florida statutes section 316.172 requires that you stop in this situation, but it also states an exception:

The driver of a vehicle upon a divided highway with an unpaved space of at least 5 feet, a raised median, or a physical barrier is not required to stop when traveling in the opposite direction of a school bus which is stopped in accordance with the provisions of this section.

So you don’t have to stop for an oncoming school bus, even if it has it’s lights on, etc., if one of the following situations applies:

“an unpaved space of at least 5 feet“

This could mean the sort of wide, flat expanse that separates northbound traffic and southbound traffic, for example, on a road or highway.

This could mean a median that might be less than 5 feet wide, but it has a curb or some other type of raised characteristics.

This could mean the sort of concrete barriers that road construction companies use, or perhaps a barrier that’s been built in as a hardscape or something like that.

Typically, there are about 2000-3000 traffic citations a year in Florida for failure to stop for school buses!

In any event, what does seem clear is that if the road is paved all the way across, and the only thing that’s separating northbound from southbound traffic is a center turn lane, you should stop.  If one of the three conditions above is met, you can proceed.  The Florida Department of Highway Safety & Motor Vehicles published an article on this topic with a diagram that pretty much lays it out. Stay safe out there, folks!